OMGGGGGGG boy band night is the GREATEST idea this show has ever had. I award myself 40 points for my performance singing all of the lyrics. It’s a crime it wasn’t televised, really.

It’s almost impossible for a jive to look slow, but this one did. It was actually, kind of a disgrace to the Beach Boys. (Sorry, guys.) Bruno said it looked like a “jive with a sun stroke” and that’s not… NOT true.

In the middle of this dance, Nancy twirled her skirt around four dudes and it was the absolute best dancing she’s done on this show. I’m ready for her to be kicked off now, I’ve seen enough.

I’M A SURVIVOR, I’M NOT GON GIVE UP, I’M NOT GON STOP, WHAT, I’M GON WORK HARDER. Sorry, still singing a bit there. Simone seemed off to me and IDK how to dance AT ALL but when I watch this show and the people’s moves don’t match the music- I’m like, yeah. Timing. Somethin’ ain’t right.

I thought this dance was really good. The judges are killing him on technicalities. Len said it wasn’t his best dance, but I kinda thought it was? To be fair, I would give anyone dancing to the Backstreet Boys a high score. TELL ME WHY- AIN’T NOTHIN BUT A HEARTACHE.

I LOVED this dance! Yes, the lift was a bit shaky, but I’m choosing to ignore that part. Also, no, I didn’t just love it because they danced to N*SYNC. What a rude thing to suggest. YOU’RE ALL I EVER WANTED, YOU’RE ALL I EVER NEEDED, YEAHHH, SO TELL ME WHAT TO DO NOW, CAUSE I-I-I-I-I I WANT YOU BACK.

Watch: Normani’s Salsa to “When I Grow Up”

Ok. I’m not *judging* because I’m an official member of the Fifth Harmony Harem now, but HOW was ANY of this dance classified as a salsa? Len was right to give them an 8. I did the salsa with a 40 year old bus driver in Guatemala once and it.did.NOT.look.like.this. 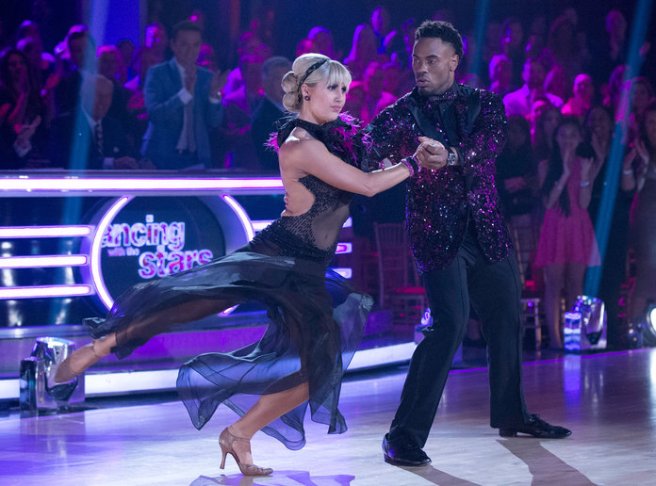 Watch: Rashad’s Tango to “Reach Out I’ll Be There”

The beginning of this dance was super awesome and Rashad is just killin’ it out there. I *thought* this was the best dance of the night. But then…

I’m not gonna lie, a big part of the reason she gets the #1 spot this week is because she danced to DON’T GO CHASING WATERFALLS, PLEASE STICK TO THE RIVERS AND THE LAKES THAT YOU’RE USED TO. This was the best rumba I’ve ever seen and somehow part of it was to a RAP?! Heather, Maks and this rumba deserved the first perfect score of the season. But then…

These four are all such good dancers that I think the judges had too high of expectations for them. Their dance was SO content heavy. The judges were unjustly harsh on them.

The boys video package was HILARIOUS, I wish I could watch it over and over. Their dance was pretty awesome and definitely entertaining. It wasn’t nearly as hard as the girls’ dance though.

When they announced that the entire boy team was safe, I thought FOR SURE Normani was in for it. AND I *JUST* JOINED THE DANGED HAREM! But then…

I was SHOCKED when Heather got kicked off and a little afraid that my bad mouthing her for six weeks may have negatively influenced America’s opinion of her. Oops. One more time, for old time’s sake: SHE WAS BEYONCE’S BACKUP DANCER. Nailed that rumba, tho.