THAT. OPENING. SCENE. OH MY GAHHHHHHHHHHHHHH. I sat with my mouth gaping open, with no ability to speak, other than to whisper WHAAATTT. I was so stunned, I didn’t realize until it was over, it was Harvey and Donna’s first on screen kiss! Let’s review: if you’re an avid “suitor” you know that Harvey and Donna chose a professional relationship over a personal one. (Kind of.) Over time it’s been revealed that they slept together once (back in the day), but Donna closed the door on our little flashback heaven and we never saw them kiss. Until last night. And it was perfect. Just, oh. so. perfect.

OR AT LEAST IT WOULD HAVE BEEN IF IT WAS REAL! I hate the Suits writers for doing this to us, but honestly, I was kinda happy it was a dream. First, when Harvey and Donna finally get together, I want ZERO percent of it off screen. Do you hear me Suits writers? ZERO PERCENT. Second, I was excited to see it was HARVEY’S dream. The show spends so much time on Donna’s love for Harvey and her wanting more from their relationship, while Harvey won’t confess his true feelings. With this dream, they’ve given us insight into Harvey’s mind.

Dream psychoanalysis: Harvey really does love Donna. And not just in the way he told her last season and then refused to elaborate. (Cop out.) He loves her in THAT way. Probably so much that he can’t express it. In the dream we see how he’s haunted by the fact Donna told him if they go there again, she won’t work for him anymore. Since we know he can’t function without her (hello panic attacks), he’s terrified of losing her. Therefore, he shuts himself off emotionally and never allows them to cross that line. (He’s also still reeling from losing Jessica, and I think this is supposed to show us how utterly worse it would be for him to lose Donna.) 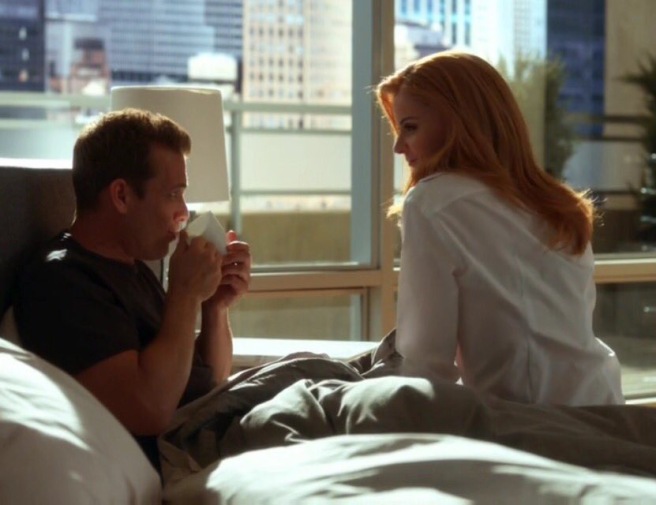 So. That’s 330 words and a dream interpretation on Harvey and Donna’s relationship all from one (pretend) kiss. You’re welcome.

Bunk keeps offering a merger but no one trusts him. (Technically they call him Robert Zane in this show, but he will always be Bunk from The Wire.) Louis hunts down ole Katrina to get her to poach 10 associates from Bunk’s firm and bring them over to whatever Pearson Specter Litt will be called now. She’s successful, but only with the help of Bunk. Turns out he really wasn’t trying to screw them, he was trying to help them for his own daughter’s sake.

Speaking of Rachel, I refuse to believe there’s a real section of the bar called “character and fitness.” This sounds made up. Even so, Rachel seems VERY worried about it. I suppose agreeing to marry a fraud looks a tad shady… even to a group of lawyers. She contemplates going to work for her dad, but doesn’t want to leave the fam. Ultimately Louis saves the day with the sweetest job offer that’s ever existed.

Harvey offers Mike a job back at the firm as a “consultant” but he’s an idiot and won’t take it. Why he thinks anyone in NYC will hire him to do legal work after he went to PRISON FOR BEING A FRAUDULENT LAWYER is beyond me. We’ve been waiting months to get the squad back together and instead Mike decides to be a teacher?! (Where he learns real quick, btw, that high school kids are meaner than any lawyer could ever be.) Harvey tries to help him, but it backfires. (Related: what’s a Suits episode without an opposing lawyer threatening to take them all down for doing something semi-illegal? No one likes you, Anita.) Mike and Harvey get into a shouting match which is really just about their own inner turmoil. As per usual.

Let’s review again: When Harvey was 16, he caught his mom cheating on his dad and suffered in silence for 2 years before his mom finally left them. Donna, being Donna, is the only one who can tell Harvey he was using Jessica and Mike as substitutes for his real family. Now that they’ve left him, he needs to heal and he can’t do that until he makes amends with his mother, her betrayal, and his feelings of abandonment. I hope he gets all of his emotional issues sorted out in one week because I’m ready to get this #Darvey party started.